Summer is almost over, so Andre Hodges says the time is right for dancing in Wing Park

“We’ll be kicking it old school. That’s right,” Hodges says of the inaugural “We in the Basement DJ Music Festival” set for Saturday from noon until 8 p.m. at the band shell in the big park on Elgin’s west side.

Hodges performs by the name DJ Dre and said he’s been spinning the wheels of steel since middle school, more than 25 years ago. The dance music featured this weekend primarily will be styles from the late 1970s through the 1990s, he said.

Hodges’ day job is an electrician at Chicago’s McCormick Place, but on nights or weekends he often plays parties, events, bars and clubs as a DJ. Gigs have included Elgin’s D Hangout and Martini Room and Lisle’s Eyes to the Skies Hot Air Balloon Festival, he said.

With the help of his family, Hodges also hosts a show he posts on social media called “We in the Basement.” As the name gives clue, the homemade program basically features Hodges in the basement of his Elgin home working electronic turntables and mixing music for his online audience.

Hodges said the online show has made it easier to keep in touch with fans and fellow DJs and served as one of the inspirations for Saturday’s festival. He’s also noticed a building urban trend of people holding picnics in parks and other day parties featuring dance music and noted the success of an assortment of music fests that include DJs.

“There’s been nothing like this before in the suburbs, particularly in the northwest suburbs,” Hodges said.

Hodges also sees his fest as a way for him and his DJ buddies to give back and thank those they’ve entertained over the years — and as a way to put the underutilized band shell to good use.

Acts are donating their time, and the festival is free to attend. It is not sponsored by the city, and Hodges obtained the permits needed to host the gathering. 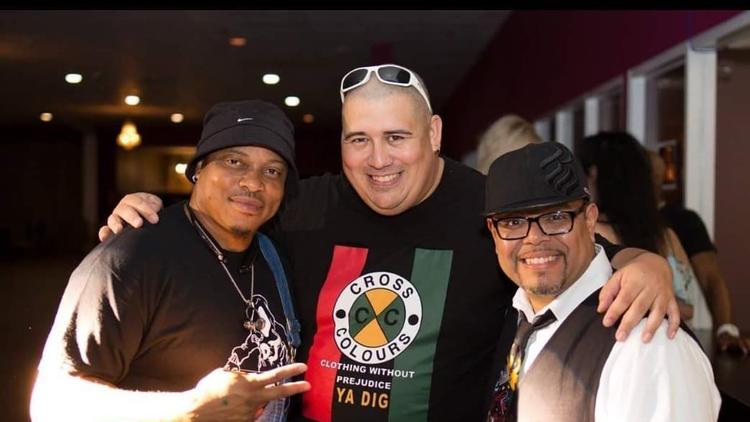 DJ Dre, DJ Bobby Styles and DJ Rudy Fausto are among the performers Saturday afternoon at the "We in the Basement DJ Music Festival" at Wing Park in Elgin (Pat Chin)

Hodges said he’s also arranged for Bea Unique Latin Kitchen to sell food and for Elgin Area Taproom to sell non-alcoholic beverages at the festival. People are welcome to bring their own food and drink, too, Hodges said, but alcohol is not allowed in the park.

“Ninety percent of what we’ll be playing will be house music, with some disco and reggaeton. And I’ll take an ’80s pop tune and overlay it with a house track. We all put on a show,” Hodges said.

Hodges said there will be guest speakers, comics and poets performing between each DJ’s set. If it rains, the plan is to move the equipment to the back of the band shell stage and to go on with the show.

“My wife and kids, parents, my whole family is behind me and everybody will have a job to do Saturday. We’re also going to be streaming it online,” Hodges said. “Come on out and dance and enjoy the day. It’s for families.”

Not an ideal time to open a new brick-and-mortar stores. These downtown Elgin businesses are trying.